With this stunning debut novel, New York Times bestselling author Lauren Oliver emerged as one of today's foremost authors of young adult fiction. Like Jay Asher's Thirteen Reasons Why and Gayle Forman's If I Stay, Before I Fall raises thought-provoking questions about love, death, and how one person's life can affect so many others.

For popular high school senior Samantha Kingston, February 12—”Cupid Day”—should be one big party, a day of valentines and roses and the privileges that come with being at the top of the social pyramid. And it is…until she dies in a terrible accident that night.

However, she still wakes up the next morning. In fact, Sam lives the last day of her life seven times, until she realizes that by making even the slightest changes, she may hold more power than she ever imagined.

Before I Fall is now a major motion picture Zoey Deutch, Halston Sage, and Kian Lawley. Named to numerous state reading lists, the novel was also recognized as a Best Book of the Year by Amazon.com, Barnes & Noble, The Daily Beast, NPR, and Publishers Weekly.

Social Media Graphics for Before I Fall 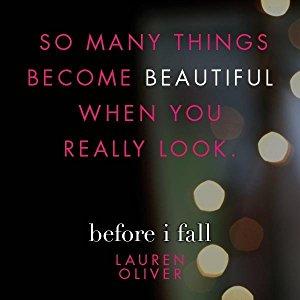 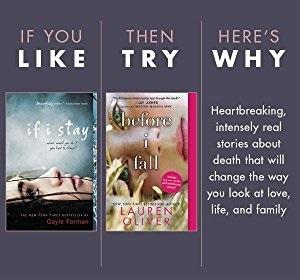 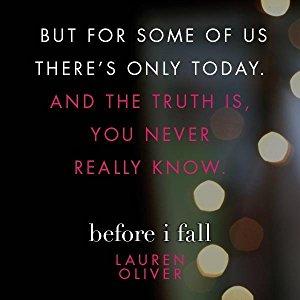 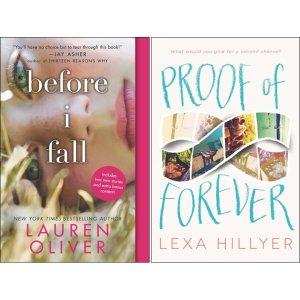 1) It’s interesting that such close friends and business partners have both written books about second chances! Why do you both think that theme resonates with readers— YA readers especially?

I think the adolescent years are really the first time we begin to confront ideas about consequence and impact. With the increased freedom of growing older comes an increasing sense of responsibility and the potential for regret. And I think in general humans are fascinated by thinking about the divergent possibilities of their lives, the way that subtle changes might have tremendous, seismic effects.

A huge part of being a teen is the struggle to figure out the kind of person you want to become. On the other hand, it’s also the first time in life you begin to experience nostalgia for the days when you were ‘just a kid.’ You’re torn between past, present, and future, realizing the only way you can go is forward. That’s a scary realization. Sometimes we just want to hit pause. Sometimes we want to go back. Fiction is a magical place where that’s possible, even when in real life it isn’t.

2) In Before I Fall, Sam gets a second chance in the sense that she is reliving one day (the day she died) over and over until she ‘gets it right.’ In Proof of Forever, a group of estranged friends time-travel back to the summer they were fifteen and have to reconcile themselves with the choices they made. ..or decide to make new ones, and potentially alter their present. What writing challenges did each of these scenarios present you with? How did you overcome them during the creative process?

One of the greatest challenges of Before I Fall is that the book is, by definition, structurally repetitive, meaning it had the potential to be incredibly redundant. At the same time, I had to confront enormous continuity issues–I had to make sure that certain things happened the same way every day, and other things changed depending on Sam’s behavior. I spent a long time outlining and re-outlining the project before I even began writing.

I also outlined extensively! It was tough juggling all four girls’ plotlines—you have to keep in mind what’s happening to all of them in every chapter, even if you’re not always seeing all of them on the page at once. Also, part of the pleasure—and point—of the book, was allowing the girls to have more perspective on their choices this time around, more awareness not just of themselves but of each other and the world. More curiosity. This meant that as a writer I needed to pay attention to the tiny things—the details that you might not pick up on in life the first time, but that you would notice and care about the second time.

3) If you could each have a second chance at a moment in your life—one epic do-over—what would it be and why?

I don’t believe in do-overs! If Sam has taught me anything, it’s that the simplest change can affect the world in ways unplanned and unforeseen, and I’m very happy with how my life is unfolding.

I agree—sometimes as tempting as a do-over sounds, it’s also scary because you don’t know what else would change if that one moment changed. Still, I think there are probably a few times when I was a teen that I let fear make my choices for me. If I could go back, I’d ask the boy out, I’d submit the embarrassing poems to more journals, I’d tell people what I really thought. I would take more risks, because I’ve learned that facing fear helps you grow stronger and faster, into the happier, more fully-realized person you want to be.

4) When talking about second chances, it’s also important to remember something you got right the first time around. What’s one choice you’ve each made that led to your success as writers and collaborators?

Starting a business is very scary. There is huge potential for failure and very few people even support the idea initially, especially if you have no business experience (which I did not). I’m very proud of simply making the decision to jump in headfirst.

Yeah, team! I agree that starting Paper Lantern Lit with Lauren was a great call, even though it was terrifying at the time and there was nothing proving we’d be able to pull it off. For me, writing this book—writing a novel at all—was also a huge leap of faith. Ironically, working with other writers for a long time made me more intimidated to try my own hand at it, and I’m so glad I finally did. It feels like a whole other side of me and my creativity has opened up as a result.

5) Proof of Forever takes place at a summer camp. Lexa, why was that setting appealing to you?

There’s something about summer camp that feels so contained and separate from the rest of life. It’s a magic bubble. Those summer memories tend to seem sort of frozen in time forever, perfectly preserved. In that sense, it felt like a good symbol of childhood and the past in general, the parts that feel crystalized and perfect just as they were. What if we could go back and see them with clear eyes, though? What would we think now? Besides, so much fun stuff happens at summer camp—kisses, camp fires, hilarious bikini-related disasters, and of course, most importantly, intense bonding with other girls, and often-surprising self-discovery.

6) Lauren, it’s been 5 years since Before I Fall was published but there is still a ton of debate online as to whether Sam actually got her do-over or not. Why do you think that question has endured? Do you think she did?

I do, yes. I absolutely do. But I’m thrilled that so much debate endures–I love books that provoke conversation and dialogue.

7) Flashback: you both are fifteen again, just like the characters in Proof of Forever. What’s the one thing you had then you want to bring back with you to the present? (And what’s the one trend you wish would stay buried in the past?)

This is so unutterably inane, but I wish I could bring back several awesome sweatshirts I lost over the years. Or my skin tone, minus sun damage, minus fifteen + years of living. Pretty much everything else, including pleather pants, jeans secured with safety pins, and lots of waffle shirts, I am happy to leave safely buried in the 90s.

I really miss those super short cut-off shorts—and the ability to wear them with absolutely no shame! I’m not sure I’d bring them back though, unless I could also bring back the scrawny legs and free spirit that went along with them! Oh also, my hair used to reach down to my butt, and I would weave scarves into my braids. It would be fun to bring that back.

8) Finally, many authors have been participating in the #DearYAMe campaign recently. If you both could share some words of wisdom with your younger selves, what would they be?

You’re doing just fine. It’s all going to be okay. In fact, it will be even better than okay.

Let go. There’s no such thing as perfect. There’s only the moment, and you’re either in it, or it’s passing you by.